Officials denounce Kathmandu permit denial to fly families of 11 civilians killed in helicopter crash to temple city of Pune A military funeral service is taking place in India for the 11 civilians, including… 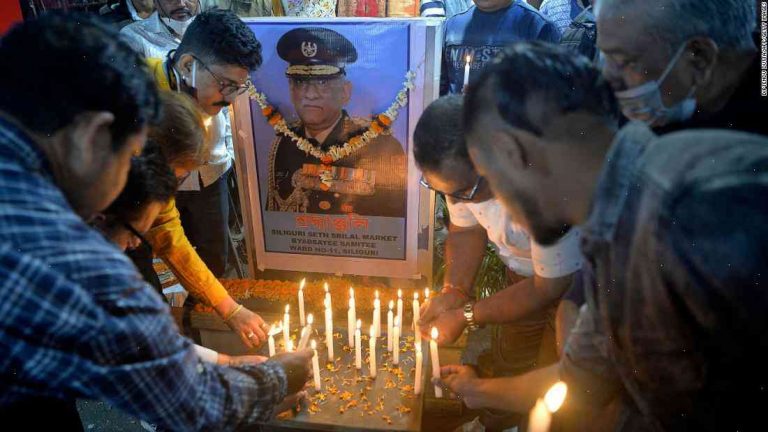 A military funeral service is taking place in India for the 11 civilians, including two children, killed when a helicopter crashed in Nepal last week.

The Sikorsky S-70B4A model army helicopter was being flown from Kathmandu to the western Indian city of Pune when it went down a short distance from the Andhra Pradesh state capital of Visakhapatnam, on Friday afternoon.

The pilot, Lt Apshay Killa, and two air crew died in the crash, which the Indian air force has described as an “accident” and said there was no violation of the air space rules. There was no immediate explanation for why the helicopter, on its way to a training base in Pune, had not landed.

“They had left for Pune to make the landings and take off,” an air force spokesperson said. “During the failure of engine, the aircraft slipped from the power and went straight to the ground. The helicopter was not damaged beyond repair.”

Officials in India described the collision with a mango tree as a “mishap” rather than a “accident”.

Rescue operations continue to recover the bodies of passengers and crew, according to the Indian defence ministry spokesman Lt Colonel Devender Anand. “A ground search and rescue operation was launched on that day [23 January] by the local search and rescue teams of Andhra Pradesh with support from the army and Air India,” Anand said.

Anand said that in all the authorities recovered the bodies of four villagers, of whom one was a woman and the rest were men, and were conducting a search for the remaining four passengers. “Since the helicopter has fallen in the wrong area, there are chances of finding more passengers in the chopper,” he said.

The unclaimed bodies will be airlifted from the crash site and be flown to India by the Air India crew, said Anand. The Indian defence ministry is paying for the funerals, which will be followed by military honours, said a defence official who requested anonymity.

In a press release on Friday, the air force said it had carried out a thorough technical investigation into the accident and observed the required safety measures “to the letter”.

“The preliminary technical investigation revealed that the accident occurred due to an engine failure, with the helicopter crashing into a mango tree. The aircraft was not damaged beyond repair,” it said.

Officials denounced Kathmandu permit denial to fly families of the 11 civilians to the temple city of Pune, from where they were to fly out of India.

“We oppose the [Nepal] Air Force permission to fly these passengers to Pune on military aircraft,” said an official with the state transport ministry who requested anonymity.

India’s air force director general, Vijay Singh, said the Nepal government must waive for reasons of “transparency” that the three individuals making the request were relatives of the victims. “Our position is that as long as there is no death certificate, these people are not entitled to any assistance from us,” he said.

“All relatives of the victims go to the military funeral services. They can’t just come for other government services. The [Kathmandu] government needs to be consistent in its position,” Singh said.

Officials in Nepal are still trying to establish what caused the helicopter to crash. One theory is that the helicopter lost engine power minutes after takeoff and the pilot tried to avoid collision with a passing road.