The vanishing women in British Columbia is a national tragedy

Police in British Columbia are mobilizing ahead of the one-year anniversary of the disappearance and suspected murder of a 22-year-old Cree woman, Eline Laing. Laing’s case brought to light a problem in the tiny… 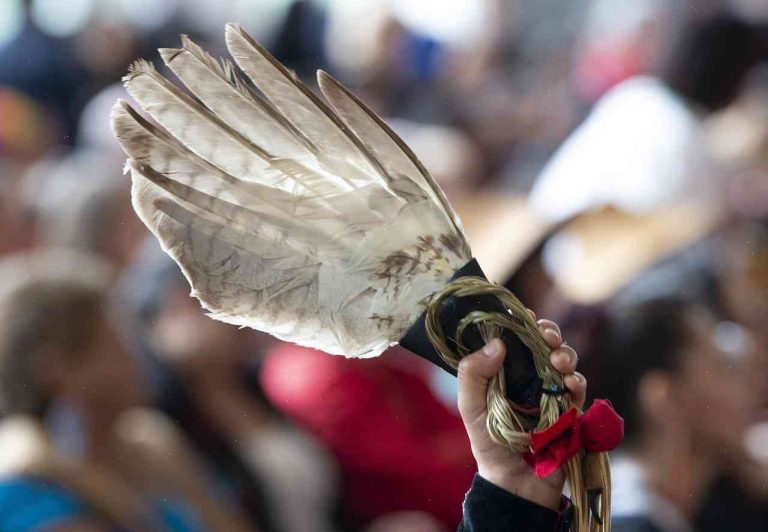 Police in British Columbia are mobilizing ahead of the one-year anniversary of the disappearance and suspected murder of a 22-year-old Cree woman, Eline Laing.

Laing’s case brought to light a problem in the tiny province: an estimated 468 women went missing between 1980 and 2012.

Nearly every missing or murdered Indigenous woman in B.C. had their own personal history of being abused, homelessness, or prostitution before they disappeared, according to a 2015 government-commissioned review of Laing’s case.

Authorities say a clearer understanding of the issue, collaboration between aboriginal groups and police, and better resources for victims’ families are all needed to address the issue.

“We understand the issue of missing and murdered aboriginal women is a huge problem,” said One Rankin Chief Kathy Gosse, a lawyer and former provincial legislator. “We all know there are thousands of victims of this issue in this province. If one is killed, there’s hundreds of families hurting.”

A recent report by a different government-commissioned panel of police, government, and non-profit organizations outlines a road map for police to fight the problem.

The report, called Know Your List: Building a Culture of Accountability in Support of Missing and Murdered Aboriginal Women and Girls, praises the province for establishing a 24-hour information line and providing resources for victim support groups. It also lists several important measures for police, including having informants keep clear records of relevant contacts and cross-checking local contacts with national data; consulting with aboriginal groups to improve on-the-ground support; and establishing a database of missing women’s and girls’ identities.

Although the report recognizes that the task of finding answers to the issue is enormous, it also says the province is working toward fulfilling its obligations under the United Nations Declaration on the Rights of Indigenous Peoples.

In the report, the provincial government says it plans to work more closely with aboriginal communities, respond to community concerns, and increase the number of victims’ support groups.

So far, there are no other details about the plan. Pressed by reporters about it, Law Minister Suzanne Anton spoke of more consultation and consultations but declined to elaborate further.

Despite promises from the provincial government, the Oseberg Report, commissioned by the previous B.C. government, pointed to a structural issue. Its conclusion was that most missing and murdered Indigenous women could have been prevented if police had recognized the pattern early on and collaborated with Aboriginal groups.

Instead, “Somewhere along the line, police across Canada were not as diligent in engaging the aboriginal community and work that is required in order to solve these cases,” said Anne McPhee, an expert with the Centre for the Study of Men and Masculinities at Western University, whose name was on the Oseberg Report.

British Columbia has gone through a period of massive political upheaval since a surprise 2015 referendum vote to leave Canada. Many Canadians viewed the referendum as a bellwether for the future of Canada. After returning to power, the new Liberal government has been hamstrung in part by controversy around its unilateral endorsement of the controversial Trans Mountain pipeline expansion project, which has the potential to increase tanker traffic in the province.

For its part, the Progressive Conservative Party, the party that defeated the Liberal government in the referendum, has also pledged to prioritise missing and murdered aboriginal women, though members have not specified specific plans.

The provincial NDP says it agrees with the Oseberg Report’s conclusion that indigenous women are disproportionally affected by violent crime.

“It is time for all of us to put our heads together and identify the best strategies for improving the experience of indigenous women and girls in B.C.,” its 2016 platform states.

Correction: An earlier version of this article misidentified the Canadian province in the headline and the title of an article that briefly referenced a claim in the Oseberg Report as untrue.